On Tuesday November 28th, the Calvary Chapel Girls Varsity Soccer team had their first pre-season game. What looked like a rough start, ended up being the beginning of a come back for these Grizzly ladies. The start of the first half was rough on the Grizzlies as their opponent, Holy Family, was off to a quick scoring streak leaving the Grizzlies down 2-0. Both players and coaches made adjustments and got our Grizzlies going. Shortly after adjustments were made, our Grizzlies started a scoring streak of their own as Juliet Garcia, one of the team captains, scored the first goal. Shortly after Emerald Morales scored a goal followed by another by Valery Galeano to give the Grizzlies the lead for the first half. As the second half began, Holy Family scored the first goal of the half to bring the score back to a tie. The Grizzlies kept fighting hard and with a goal from Abigail Meza, the Grizzlies took the lead once again. Holy Family wasted no time getting back into the game as they scored another goal to tie the score at 4-4. As this nail biting game continued, one of our center back defenders Hannah Masterson, took a long shot from far back, and scored to bring the Grizzlies up by 1. As the second half came to an end, the Grizzly girls scored two more goals including a header from the Grizzlies other captain, Gabriela Garcia. The Grizzly ladies showed heart and determination coming back from a 0-2 deficit to take the win 7-4 with goals from five different players. 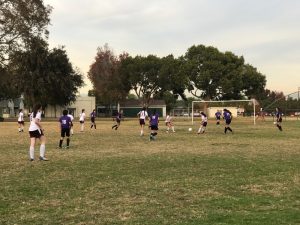