In 2001, standout basketball star Tim Drisdom (2 time CIF Player of the Year) led the Calvary Chapel Downey Varsity Boys Basketball team to the school’s first CIF Championship. The Grizzlies finished the season with a 28-5 overall record, which culminated in a victory over Kilpatrick in the CIFSS Division 5AA Championship Game.

The boys enjoyed their memories, the team plaque, the patches and of course, the rings! But at some point, not too far after, it was decided that their individual names should not be on the banner that hangs high in the CCCS Gymnasium. It has been over 15 years since those names were removed from that banner, which was done in an effort to give glory to God, as opposed to man. However, the Lord tells us in Romans 13:7 to “.. give honor to whom honor is due.” Our current administration has taken this to heart and determined that we can, in fact, glorify God by honoring the athletes that have gone through HIS school, and accomplished awesome things with the gifts, talents and abilities that HE gave them!

Please note that our Boys JV team plays at 4:30pm, followed by our Varsity Girls Basketball team at 6:00pm. Our Girls team will be honoring their senior players prior to their 6:00pm tip-off and we will have food for sale that night during both Varsity games.

GAME ADMISSION IS FREE THIS NIGHT. 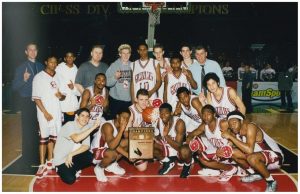 Downey Relays
8:00 am
View All Events