Brandon Burlsworth is known as one of the greatest walk-on football players in NCAA history. He showed up as a walk-on freshman at the University of Arkansas and through hard work and dedication, earned himself a scholarship. He was the first football player in the history of the university to earn a Master’s degree “before” playing his last game. Brandon was selected by the Indianapolis Colts in the 1999 NFL draft, and after minicamp, was projected by his coaches to start as a rookie. Unfortunately, Brandon was tragically killed in an automobile collision just 11 days later.

The Brandon Burlsworth Foundation believes that our nation needs to place a higher value on character. The Burlsworth Character Award is meant to recognize outstanding character and sportsmanship, and is now a nationwide award for high school senior football players. This award honors the player who represents the ideals and values that Brandon Burlsworth had: to give 100 percent on the field and to stand as a moral example to his team. This year, as voted on by our varsity football team, in agreement with the Head coach and our other football coaches, our 2019 Brandon Burlsworth Character Award goes to Luke Manriquez. 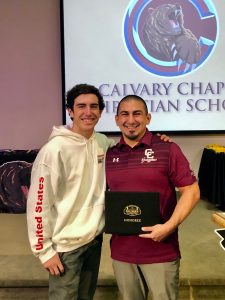